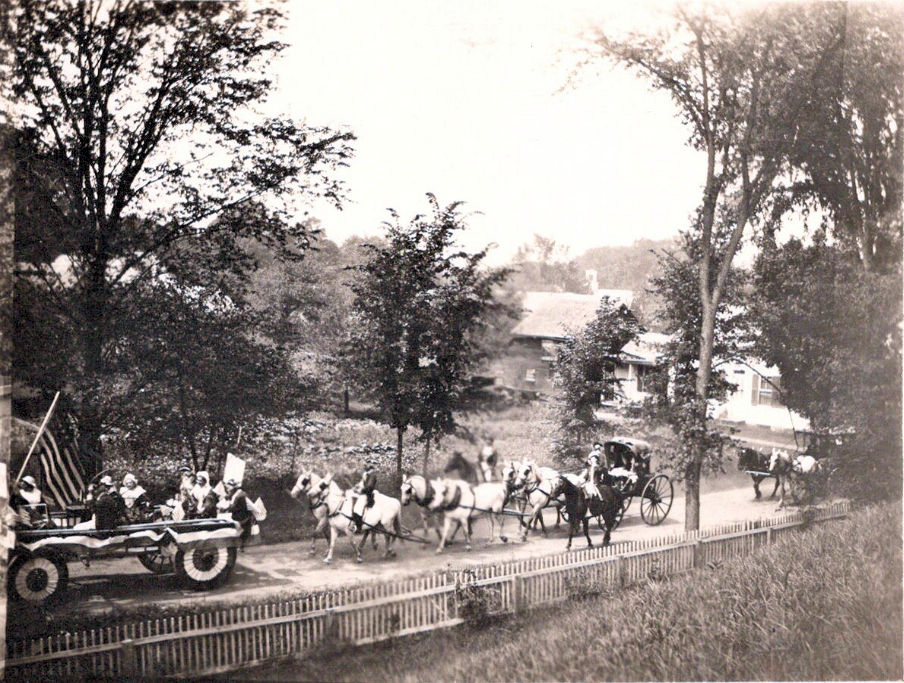 In the November issue, I stated that there were 62 names on the Hartland Honor Roll. I only wrote about the men whose war service was described by Walter Hatch. Some readers told me they enjoyed reading about Hartland guys who were old when we were young. Here are some more names from Mr. Hatch’s writing about members of the Hartland Legion Post.
Les Motschman

Hamilton Bail joined the Legion in 1946. He served in both wars. (I knew him in the 1970’s as my father did work for him. He lived in the brick house beyond Fairview Farm on the Dam Road.)
Dean McArthur is on the Hartland Honor Roll. He served in a Battery of the American Expedition Force. The McArthur farm was on the Quechee Road (Now the large brick house owned by the Littles). After his Army service he married and bought the property in Foundryville that was featured for sale in 1855 in the previous HHS newsletter. Mr. McArthur worked for the Hartland Telephone Company, which was owned by Ernest and Jennie English. He also worked in the garage Mr. English established as the first one in town. The garage was the red building near the Foundryville bridge across from the falling-down Telephone garage.
Paul Morrison ran a store in both North Hartland and Hartland Three Corners. He also served in both world wars.
William Carter will be remembered for his work at the Hartland Fair. In his younger days, Bill was a canvas man with a circus. He supervised the tent city at the Fair.
Fred Crowel worked in the area as a carpenter. He bought the old creamery building in the Four Corners and remodeled it into apartments (Now the bridal shop).
John B. Cawthorn married Dorothy Lamb and lived until his death in the brick house at the corner of Route 5 and Martinsville Road. He was from the Carolinas.
Rodney Burk was listed in the previous HHS newsletter as one of the Hartland men who went to France during the World War. Burk grew up on the Crandall Place on Weed Road (now Kennedy/O’Brien). I indicated that after the War he lived in the red house on the corner of Brownsville and County Roads (Gilberts), but it was probably the next house up County Road
as Mr. Hatch wrote that he built a cement dam above the house to store water for an ice harvesting business. At that time the Whiting Creamery in Four Corners stored a large quantity of ice to cool milk and cream in the summer. The milk and cream was shipped by rail to Whiting’s main plant in Boston. The dam is still visible, but the pond is mostly filled in.
Dean Bradley ran Fairview Farm on the Dam Road in North Hartland. He served with the American Expedition Force during the World War.
James Young worked at Fairview Farm and later started a trucking business. He was stationed in Fort Worth, Texas during the War.
Frederick Woodruff worked with the Red Cross in France during the War. He bought the house in Four Corners right on the corner of Route 12 and the Brownsville Road. He was involved with the small library that was across the street for many years. His wife Olga made the memorial that used to be on the Damon Hall lawn (It’s now in our HHS museum. It lists WWI, WWII and Korean War veterans from Hartland.).
Clint French was sent to the Clarkson College Training Depot in Pottsdam, NY during the War. He lived in a very old house in Foundryville (Now Derek Levin’s).
Deane Hoisington spent the War at the U. S. Naval Air Station in Halifax, Nova Scotia. NAS Halifax was established in 1918 as a base for “flying boats.” These large seaplanes had no landing gear and were used to patrol the North American coast looking for German U-Boats. (Wikipedia). His farm on Merritt Road still retains his name, even though he sold the farm in the 60’s and built a house nearby just off the Quechee Road.
Robert Patch is on the Hartland Honor Roll. He went into the garage business in Lebanon after the War. The Flanders and Patch name was still in use up until a couple of years ago.
Withington brothers Earle and Robert “Lyle” were from N. Hartland. During the War, Earle was at Camp Wright in Maryland and Robert was at Camp Devens in Massachusetts.
HHS member Judy Howland pointed out to me that I was spelling Osro Patch’s first name incorrectly (Osro, not Orso). That’s interesting because in the first part of his 13-page paper, Walter Hatch was misspelling his friend’s name wrong (Ozro).