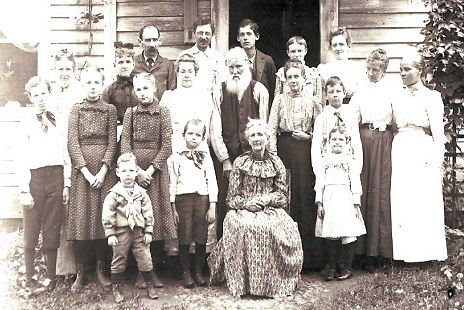 This document was compiled by Howland Atwood in 1991. Except for some minor typographical and editorial corrections, what follows is exactly as he filed it in the Hartland Historical Library.

The Willard Cemetery is primarily a private family cemetery, located on the left, part way up Mace Hill.  As in other cases, some neighbors were permitted to bury their dead there.  Byron P. Ruggles made his survey of the Quaker Willard Grave-yard in August 1907 and he recorded nineteen gravestones.  There are probably a few unmarked graves.   The oldest gravestone appears to be that of Betsey, daughter of James N. and Abigail Willard, who died in 1800.

The Willard farm was the one owned and occupied by Willis Curtis. Whether or not the land once extended as far up Mace Hill as to include the cemetery lane is not presently known, although it would seem likely that it did. The farm now extends up to the Cobb Hill road, up to the Cobb place, which was probably sold off from the original farm.   Just when the Billards came to that farm is not known either.

James Nutting Willard is not listed in Densmore’s Census of April 5, 1771 for Hertford (Hartland) in Cumberland County, Vermont, but his name does appear in the list of “Poles & Notable Estate of Inhabitants of Hertford” in 1778.  (Hertford was changed to Hartland by vote of the legislature in 1782).

James Nutting Willard was of the fifth generation to live in America.  His immigrant ancestor, Major Simon Willard emigrated from County Kent in England in 1634. Simon’s eleventh child, probably by his third wife, Mary Bunster, was Henry 2 Willard, who married, first, Mary Lakin of Groton.  Their second child, Simon 3 Willard was born in Groton, Mass. Oct. 6, 1678. He married Mary Whitcomb and they lived in Lancaster, Mass., where he died in 1706. On Dec. 12th 1706, his widow married Samuel Farnsworth and she was the mother of Samuel, David, and Stephen Farnsworth, the first settlers of Fort No. 4 or Charlestown, New Hampshire. Moses 4 Willard, the second son of Simon 3, was born at Lancaster about 1702 or 3 and along with his half-brothers, the Farnworths, also became an early settler of Fort No. 4, removing there permanently by May 1742.  Moses 4 Willard married at Groton, Mass. Sept 28, 1727, Susana Hastings.  They had four children.  Their second daughter, Susanna, married Capt. James Johnson.   She became the mother of Elizabeth Captive Johnson, who was born in Cavendish near Reading, Vermont, while Mrs. Johnson was a captive of the Indians.  The fourth child and only son was James Nutting 5 Willard of the fifth generation.

Since the last three children are said to have been born in Hartland, James Nutting Willard must have brought his family to Hartland later in the year of 1772 or early in 1773.  At least three of the James N. Willard children are buried in the Willard Cemetery, perhaps four or five.

Oliver Willard, one of the earliest settlers of Hartland was a first cousin of Moses 4 Willard, the father of James Nutting 5 Willard.

At some time in his earlier life James Nutting Willard became a Quaker and in his later years was usually referred to as Quaker Willard.  The farm dog population gradually increased up to the point that Quaker Willard thought that he must destroy some of them, but he first told his children that each one could select his favorite dog to keep.  So each child took a stand beside his favorite dog, saying, “Thee must not kill this one” and “thee must not kill this one” until there was only one left.  Mr Willard called the remaining dog to him and said “Hast thou no friend among the children? Thou shouldst have a friend; I will therefore be thy friend”.  So all the dogs continued to live.

Note:  the copy is not clear in many places, so some of this may be incorrect.

Edw’d Willard Vt. Mil. Ref. War (A government marker) Since Edward was but 10 years old in 1775, he must have entered service towards the end of the war.

Eliza C., Wife of Martin L. Peterson, died July 1, 1828   AE 29 years.
(This gravestone is half imbedded in a large pine tree on its left.)
The Christian names were supplied by the B. P. Ruggles record.